For the second year, Movilok will be as exhibitor at the International Tourism Trade Fair FITUR 2017, to be held in Madrid from January 18-22. There, we’ll show how Showcases is able to enhance customer experience in tourism business, specially in hospitality, catering sector and travel agencies.
In addition, new features will be shown to improve equipment management and maintenance, as well as to improve customer attraction and increase the turnover:

Sometimes we find digital signage equipment suffering from temporary errors, not playing the configured content, showing frozen content or their OS screens. The error usually persists until some person in charge is noticed and solves the problem or calls for support. This may involve longer downtimes, specially when equipment is deployed in multiple locations or facilities.
These problems mean a loss of advertising impact and a significant decrease of the brand image. Movilok Showcases now provides a new player management system, integrated in the existing Showcases management console, which allows our clients to know the status of each player device in a remote and centralised way, and which is also able to send a notification when a device stops working. 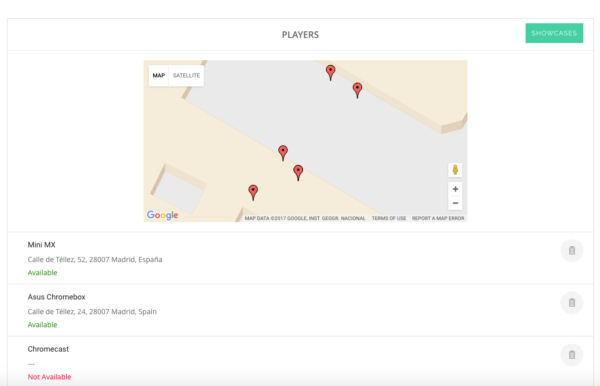 Additionally, the system has the following main features for remote management:

With this management system, device maintenance and problem solving times may be minimised, since real time information and remote management features for every player are available.

Since its conception, Movilok Showcases has supported digital coupons in its interactive showcases, which can be downloaded to the users’ smartphones and manually redeemed in participant establishments.
Now, Showcases integrates a new dynamic coupon system, able to manage the full cycle of coupon generation, distribution and redemption. Our clients will be now able to create coupons, that will be distributed by Movilok Showcases displays, downloaded to the users’ smartphones according to configured limits, and automatically redeemed by authorised third party establishments.
Now, the coupon administration system is able to generate reports of downloaded and redeemed coupons. Besides, the system is able to register users who download a coupon, providing valuable contact information for eventual commercial actions.

Security is one of major concerns to install digital signage equipment in unattended locations, such as hotel rooms, where lost & damage issues are frequent.
Movilok shows in FITUR 2017 the new security module to host Showcases players. This module is integrated between the TV set and its wall support. The security module is designed to prevent access to the player device, thus increasing security in these types of locations and reducing maintenance costs, while allowing to provide customers with our interactive catalog of products, services and recommendations.
The security module can host Showcases player devices with “stick” form-factor, and is compatible with a wide range of standard TV wall supports.